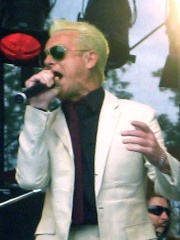 Graham Bonnet (born 23 December 1947) is an English rock singer. He has recorded and performed as a solo artist and as a member of several hard rock and heavy metal bands including Rainbow, Michael Schenker Group, Alcatrazz, and Impellitteri. He is known for his powerful singing voice but is capable of also singing soft melodies. Read more on Wikipedia

Among singers, Graham Bonnet ranks 542 out of 3,541. Before him are Rita Marley, Jeanette, LP, Lola Novaković, Montserrat Figueras, and Jennifer Rush. After him are Patsy Cline, Elena Obraztsova, Zaz, Rosemary Clooney, Ceca, and Roza Eskenazi.