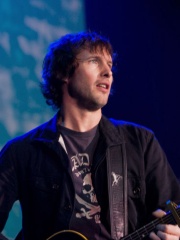 James Hillier Blount (born 22 February 1974), better known as James Blunt, is an English singer, songwriter and musician. A former reconnaissance officer in the Life Guards regiment of the British Army, he served under NATO during the 1999 Kosovo War. After leaving the military, he rose to fame in 2004 with the release of his debut album Back to Bedlam, achieving worldwide fame with the singles "You're Beautiful" and "Goodbye My Lover". Blunt's first album has sold over 11 million copies worldwide, topping the UK Albums Chart and peaking at number two in the US. Read more on Wikipedia

Among singers, James Blunt ranks 560 out of 3,528. Before him are Geri Halliwell, DMX, Paul Robeson, J-Hope, Marcia Barrett, and Bobby Kimball. After him are Line Renaud, Fergie, Carmela Corren, Del Shannon, Alexander Rybak, and Brenda Lee.