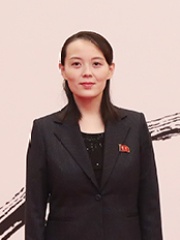 Kim Yo-jong (Korean: 김여정; born 26 September 1987) is a North Korean politician serving as the Deputy Director of the United Front Department of the Workers' Party of Korea (WPK). She also served as an alternate member of the Politburo of the Workers' Party of Korea from 2017 to 2019, and from 2020 to 2021. Kim is the youngest child of North Korea's second Supreme Leader, Kim Jong-il. Read more on Wikipedia

Among politicians, Kim Yo-jong ranks 7,397 out of 15,710. Before her are Princess Caroline of Denmark, Martina, Thiệu Trị, Mieszko I Tanglefoot, Fakhruddin Ali Ahmed, and Zawisza Czarny. After her are Andronikos Doukas, Oliviero Carafa, Floris I, Count of Holland, Odoardo Farnese, Hereditary Prince of Parma, Gertrude of Saxony, and Dragoș, Voivode of Moldavia.

Among POLITICIANS In North Korea