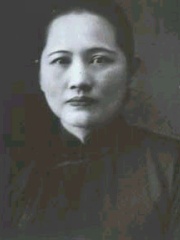 Rosamond Soong Ch'ing-ling (27 January 1893 – 29 May 1981) was a Chinese political figure. As the third wife of Sun Yat-sen, one of the leaders of the 1911 revolution that established the Republic of China, she was often referred to as Madame Sun Yat-sen. She was a member of the Soong family and, together with her siblings, played a prominent role in China's politics prior to and after 1949. Read more on Wikipedia

Soong Ching-ling is most famous for being the wife of Sun Yat-sen, the first president of the Republic of China.

Among politicians, Soong Ching-ling ranks 1,444 out of 15,710. Before her are Leo von Caprivi, Tsai Ing-wen, Alfonso VIII of Castile, James II of Aragon, Viktor Yushchenko, and Giuliano de' Medici, Duke of Nemours. After her are Seti II, Béla I of Hungary, Sariputta, Leo II, Cyaxares, and Vallabhbhai Patel.