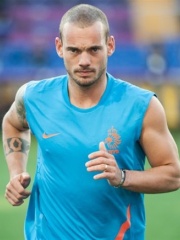 Wesley Sneijder (Dutch pronunciation: [ˈʋɛsli ˈsnɛidər] (listen); born 9 June 1984) is a Dutch retired professional footballer. Due to his elite playmaking ability, Sneijder was considered one of the best midfielders in the world during his prime.A product of the Ajax Youth Academy, he started his professional career playing for Ajax, with whom he won four trophies and was awarded the Johan Cruyff Trophy in 2004. He was sold to Real Madrid for €27 million in 2007, winning La Liga in his first season with the club, and transferred to Inter Milan for €15 million in 2009. Read more on Wikipedia