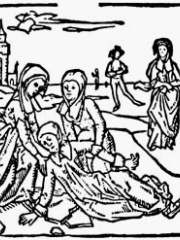 Lidwina (Lydwine, Lydwid, Lidwid, Liduina of Schiedam) (1380-1433) was a Dutch mystic who is honored as a saint by the Catholic Church. She is the patron saint of the town of Schiedam and of chronic pain. Lidwina is also thought to be one of the first documented cases of multiple sclerosis. Read more on Wikipedia

Since 2007, the English Wikipedia page of Lidwina has received more than 142,748 page views. Her biography is available in 20 different languages on Wikipedia (up from 19 in 2019). Lidwina is the 1,123rd most popular religious figure (down from 894th in 2019), the 240th most popular biography from Netherlands (down from 171st in 2019) and the 5th most popular Dutch Religious Figure.

Lidwina is most famous for her visions of the Virgin Mary, which she received at the age of twelve. She was also known for her healing powers and her devotion to the Virgin Mary.

Page views of Lidwinas by language

Among religious figures, Lidwina ranks 1,123 out of 2,238. Before her are Leonardo Sandri, Lutgardis, Maria Alexandrovna Ulyanova, Anthony Maria Zaccaria, Begga, and Brigid of Kildare. After her are Ulrich of Augsburg, Abraham Hyacinthe Anquetil-Duperron, Charles III William, Margrave of Baden-Durlach, Junípero Serra, Archduke Charles Joseph of Austria, and Mata Amritanandamayi.

Among people born in 1380, Lidwina ranks 11. Before her are Poggio Bracciolini, Bernardino of Siena, Prokop the Great, Yawar Waqaq, Mustafa Çelebi, and Itzcoatl. After her are İsa Çelebi, Jalal al-Din Khan ibn Tokhtamysh, Nanni di Banco, Anna of Cilli, John Fastolf, and Joseph Albo. Among people deceased in 1433, Lidwina ranks 5. Before her are Zheng He, John I of Portugal, Lê Lợi, and Emperor Go-Komatsu. After her are Baysunghur, Joan of France, Duchess of Brittany, and Nicholas II Garai.