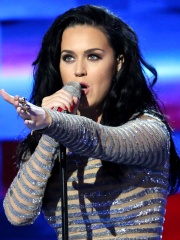 Katheryn Elizabeth Hudson (born October 25, 1984), known professionally as Katy Perry, is an American singer, songwriter, actress and television personality. She is known for her influence on the pop sound and style of the 2010s. Pursuing a career in gospel music at 16, Perry released her commercially unsuccessful debut album, Katy Hudson (2001), under Red Hill Records. Read more on Wikipedia

Among singers, Katy Perry ranks 376 out of 3,528. Before her are LP, Senesino, Selena, Dino Merlin, Alpha Blondy, and Malcolm McLaren. After her are Harry Nilsson, Karen Carpenter, Henri Salvador, Liz Mitchell, Black, and Laila Halme.