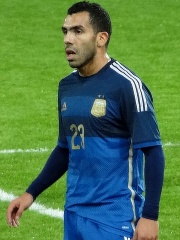 Carlos Alberto Tevez (American Spanish: [ˈkaɾlos ˈteβes]; born 5 February 1984) is an Argentine professional footballer who last played for Boca Juniors. A quick, tenacious, powerful, hard-working and dynamic forward in his prime, Tevez is capable of playing as a striker, as a winger, as a supporting forward, or as an attacking midfielder. Tevez began his career with Boca Juniors, winning the Copa Libertadores and Intercontinental Cup in 2003 before moving to Brazilian club Corinthians, where he won the Campeonato Brasileiro Série A. His moves to English clubs West Ham United in 2006 and Manchester United in 2007 were plagued by issues relating to his third-party ownership by Media Sports Investment, and their resulting sagas paved the way for changes to both Premier League and FIFA regulations.In 2009, Tevez joined Manchester United's rivals Manchester City. Read more on Wikipedia