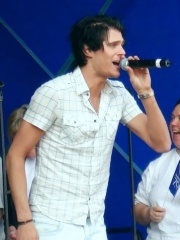 Jonas Erik Altberg (Swedish pronunciation: [ˈjûːnas ˈêːrɪk ˈâltbærj]; born 22 December 1984 in Halmstad), better known by his stage name Basshunter (also stylised as BassHunter), is a Swedish singer, record producer and DJ. He began producing music under the stage name "Basshunter" in 2001. He recorded six studio albums: The Bassmachine (2004), LOL (2006), The Old Shit (2006), Now You're Gone – The Album (2008), Bass Generation (2009) and Calling Time (2013). In addition to his own music, he has written and produced for many artists. Read more on Wikipedia

Since 2007, the English Wikipedia page of Basshunter has received more than 1,195,638 page views. His biography is available in 177 different languages on Wikipedia making him the 263rd most popular singer.

Page views of Basshunters by language