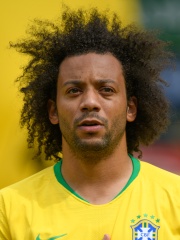 Marcelo Vieira da Silva Júnior (born 12 May 1988), known as Marcelo, is a Brazilian professional footballer who plays as a left-back for Super League Greece club Olympiacos. Known for his offensive capabilities, trickery, and technical qualities, Marcelo is often regarded as one of the greatest left-backs of all time. He has spent most of his career with Spanish club Real Madrid and is the club's most decorated player, with 25 trophies won.Starting his professional career in 2005, Marcelo won a Campeonato Carioca with Fluminense in 2006, during which he was named to the Brasileirão Team of the Season, at age 18. Read more on Wikipedia

Page views of Marcelos by language