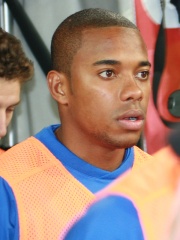 Robson de Souza (Brazilian Portuguese: [ˈʁɔpsõ] or [ˈʁɔbisõ d(ʒi) ˈsowzɐ], born 25 January 1984), more commonly known as Robinho (Brazilian Portuguese: [ʁɔˈbĩɲu]), is a Brazilian former professional footballer who played as a forward.In 1999, at 15 years of age, Robinho was picked by Brazil legend Pelé as his heir apparent and, in 2002, went on to lead Santos FC to their first Campeonato Brasileiro title since Pelé himself played for the club. Afterwards he went on to win a second title with Santos, two more with Spanish club Real Madrid, and the Italian Serie A title in his first season at Milan. Read more on Wikipedia

Page views of Robinhos by language