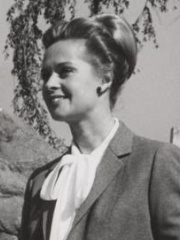 Nathalie Kay "Tippi" Hedren (born January 19, 1930) is an American actress, animal rights activist, and former fashion model. A successful fashion model who appeared on the front covers of Life and Glamour magazines, among others, Hedren became an actress after she was discovered by director Alfred Hitchcock while appearing on a television commercial in 1961. She achieved great praise for her work in two of his films: the suspense-thriller The Birds (1963), for which she won a Golden Globe Award for New Star of the Year, and the psychological drama Marnie (1964). Read more on Wikipedia

Tippi Hedren is most famous for her role in the Alfred Hitchcock film, The Birds.