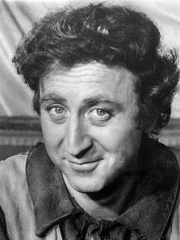 Jerome Silberman (June 11, 1933 – August 29, 2016), known professionally as Gene Wilder, was an American actor, writer, and filmmaker. Wilder is known mainly for his comedic roles, and is remembered for his iconic portrayal of Willy Wonka in Willy Wonka & the Chocolate Factory (1971) and for his four films with Richard Pryor: Silver Streak (1976), Stir Crazy (1980), See No Evil, Hear No Evil (1989), and Another You (1991).Wilder began his career on stage, and made his screen debut in an episode of the TV series The Play of the Week in 1961. Although his first film role was portraying a hostage in the 1967 motion picture Bonnie and Clyde, Wilder's first major role was as Leopold Bloom in the 1967 film The Producers for which he was nominated for an Academy Award for Best Supporting Actor. Read more on Wikipedia

Gene Wilder is most famous for his role as Willy Wonka in the 1971 film Willy Wonka and the Chocolate Factory.