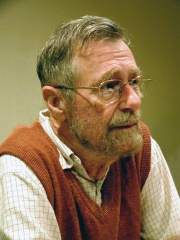 Edsger Wybe Dijkstra (; Dutch: [ˈɛtsxər ˈʋibə ˈdɛikstra] (listen); 11 May 1930 – 6 August 2002) was a Dutch systems scientist, programmer, software engineer, science essayist, and pioneer in computing science. A theoretical physicist by training, he worked as a programmer at the Mathematisch Centrum (Amsterdam) from 1952 to 1962. A university professor for much of his life, Dijkstra held the Schlumberger Centennial Chair in Computer Sciences at the University of Texas at Austin from 1984 until his retirement in 1999. Read more on Wikipedia

Since 2007, the English Wikipedia page of Edsger W. Dijkstra has received more than 1,024,998 page views. His biography is available in 53 different languages on Wikipedia making him the 7th most popular computer scientist.