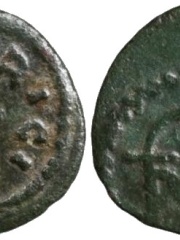 Theuderic I (c. 485 – 533/4) was the Merovingian king of Metz, Rheims, or Austrasia—as it is variously called—from 511 to 533 or 534. He was the son of Clovis I and one of his earlier wives or concubines (possibly a Franco-Rhenish Princess, Evochildis of Cologne). Read more on Wikipedia

Theuderic I, or Theudebert I, was the king of Austrasia from 533 to his death in 548. He was the son of Clotaire I and Ingunda. His sister was Theudechild. Theuderic is most famous for his military campaigns in the Byzantine Empire. He made a treaty with Justinian I, the emperor of Byzantium, which allowed him to send troops to aid in the Byzantine's fight against the Sassanid Empire.

Page views of Theuderic IS by language

Among politicians, Theuderic I ranks 1,711 out of 15,710. Before him are Faustina the Younger, Hoshea, Celâl Bayar, Chilperic II, Rudolf IV, Duke of Austria, and Attalus I. After him are Horik I, Bernhard von Bülow, Corazon Aquino, Duchess Sophie Charlotte in Bavaria, Suleyman Shah, and Symon Petliura.