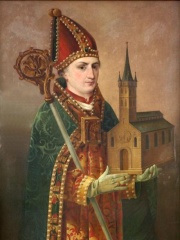 Ansgar (8 September 801 – 3 February 865), also known as Anskar, Saint Ansgar, Saint Anschar or Oscar, was Archbishop of Hamburg-Bremen in the northern part of the Kingdom of the East Franks. Read more on Wikipedia

Ansgar is most famous for being the first Archbishop of Hamburg-Bremen. He was an advisor to Charlemagne and a missionary to Denmark.

Page views of Ansgars by language

Among religious figures, Ansgar ranks 489 out of 2,238. Before him are Rashi, Dorothea of Caesarea, Pope Soter, Jehoshaphat, Saint Spyridon, and Antipope Clement VII. After him are Pope Silverius, Ahmed Yassin, Korah, Peter the Hermit, Pope Stephen I, and Pope Miltiades.

Among people born in 801, Ansgar ranks 2. Before him is Al-Kindi. After him are Ya'qubi, Huang Chao, Malcolm I of Scotland, Constantine II of Scotland, Zoe Zaoutzaina, Enravota, Leo Phokas the Elder, Grímur Kamban, Theodora, and Eudokia Dekapolitissa. Among people deceased in 865, Ansgar ranks 1. After him are Æthelberht, King of Wessex, Kassia, and Paschasius Radbertus.