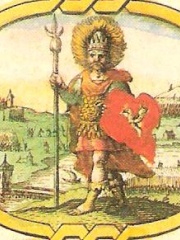 Cerdic (; Latin: Cerdicus) is cited in the Anglo-Saxon Chronicle as a leader of the Anglo-Saxon settlement of Britain, being the founder and first king of Saxon Wessex, reigning from 519 to 534 AD. Subsequent kings of Wessex were each claimed by the Chronicle to descend in some manner from Cerdic. His origin, ethnicity, and even his very existence have been extensively disputed. However, though claimed as the founder of Wessex by later West Saxon kings, he would have been known to contemporaries as king of the Gewissae, a folk or tribal group. Read more on Wikipedia

Since 2007, the English Wikipedia page of Cerdic of Wessex has received more than 505,914 page views. His biography is available in 30 different languages on Wikipedia making him the 6,413th most popular politician.

Page views of Cerdic of Wessexes by language

Among politicians, Cerdic of Wessex ranks 6,375 out of 14,801. Before him are Wolf-Heinrich Graf von Helldorff, Pierre Gemayel, Kjell Magne Bondevik, Haakon Magnusson of Norway, Humberto Delgado, and Eleonore Reuss of Köstritz. After him are Philip, Elector Palatine, Maumoon Abdul Gayoom, Frederick III, Landgrave of Thuringia, Fujiwara no Kamatari, Nguyễn Hữu Thọ, and William, Duke of Jülich-Cleves-Berg.