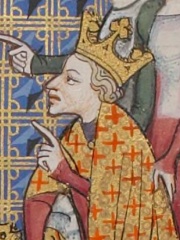 Charles II (10 October 1332 – 1 January 1387), called Charles the Bad, was King of Navarre 1349–1387 and Count of Évreux 1343–1387. Besides the Pyrenean Kingdom of Navarre, he had extensive lands in Normandy, inherited from his father, Count Philip of Évreux, and his mother, Queen Joan II of Navarre, who had received them as compensation for resigning her claims to France, Champagne, and Brie in 1328. Thus, in Northern France, Charles possessed Évreux, Mortain, parts of Vexin, and a portion of Cotentin. Read more on Wikipedia

Charles II of Navarre is most famous for his role in the War of the Three Henrys, which was a conflict between his uncle, Henry III of France, and his two other uncles, Henry I of Navarre and Henry II of England.

Page views of Charles II of Navarres by language

Among politicians, Charles II of Navarre ranks 1,457 out of 15,710. Before him are Richard of York, 3rd Duke of York, Mentuhotep II, Constantine VIII, Victor Amadeus II of Sardinia, Amaro Pargo, and Ananda Mahidol. After him are Naram-Sin of Akkad, Zhao Ziyang, Charlotte, Grand Duchess of Luxembourg, Haakon the Good, Yeonsangun of Joseon, and Zaynab bint Jahsh.