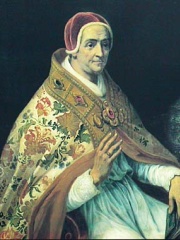 Robert of Geneva, (French: Robert de Genève; 1342 – 16 September 1394) elected to the papacy as Clement VII (French: Clément VII) by the cardinals who opposed Urban VI, was the first antipope residing in Avignon, France. His election led to the Western Schism. The son of Amadeus III, Count of Geneva, Robert became Archbishop of Cambrai and was made a cardinal in 1371. Read more on Wikipedia

Clement VII was the last of the Avignon popes and was most famous for his decision to move the papacy back to Rome.

Among religious figures, Antipope Clement VII ranks 459 out of 2,272. Before him are Rabbi Akiva, Ahmed Yassin, Eric IX of Sweden, Pope Miltiades, Rashi, and Genevieve. After him are Micah, John Wesley, Rose of Lima, Pope Anastasius III, Devadatta, and Umm Salama.

Among people born in 1342, Antipope Clement VII ranks 3. Before him are Philip the Bold and Tokhtamysh. After him are Jeong Dojeon, Frederick the Simple, Leo V, King of Armenia, Julian of Norwich, Catherine of Bohemia, and Sancho Alfonso, 1st Count of Alburquerque. Among people deceased in 1394, Antipope Clement VII ranks 1. After him are Anne of Bohemia, John Hawkwood, Mary de Bohun, Constance of Castile, Duchess of Lancaster, Gongyang of Goryeo, Emperor Chōkei, and Maria Angelina Doukaina Palaiologina.