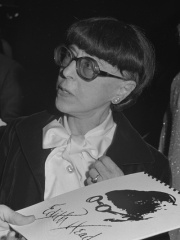 Edith Head (October 28, 1897 – October 24, 1981) was an American costume designer who won a record eight Academy Awards for Best Costume Design between 1949 and 1973, making her the most awarded woman in the Academy's History. Born and raised in California, Head started her career as a Spanish teacher, but was interested in design. After studying at the Chouinard Art Institute in Los Angeles, Head was hired as a costume sketch artist at Paramount Pictures in 1923. Read more on Wikipedia

Among politicians, Edith Head ranks 6,307 out of 15,710. Before her are Henri d'Orléans, Duke of Aumale, Vladimir of Bulgaria, Chimalpopoca, Abdel Hakim Amer, Yehuda Ashlag, and Armando Guebuza. After her are Jehan Sadat, Ashikaga Yoshimasa, Ferdinand, Prince of Asturias, Johannes Schober, Horst Seehofer, and Eleanor of Castile.