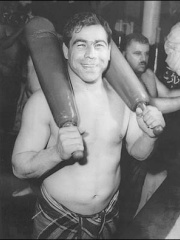 Gholamreza Takhti (Persian: غلامرضا تختی, August 27, 1930 – January 7, 1968) was an Iranian Olympic Gold-Medalist wrestler and Varzesh-e Bastani (Persian Traditional Sport) practitioner. Popularly nicknamed Jahān Pahlevān (جهان پهلوان; "The World Champion") because of his chivalrous behavior and sportsmanship (Javanmardi in Iranian culture), he was the most popular athlete of Iran in the 20th century, although dozens of Iranian athletes have won more international medals than he did. Takhti is still a hero to many Iranians. Read more on Wikipedia

Among wrestlers, Gholamreza Takhti ranks 22 out of 703. Before him are El Santo, Rikidōzan, Giant Baba, Triple H, Ivan Poddubny, and Aleksandr Medved. After him are Rocky Johnson, The Great Khali, Stone Cold Steve Austin, The Miz, Darren Young, and Wim Ruska.

Among WRESTLERS In Iran