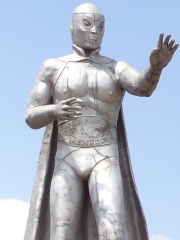 Rodolfo Guzmán Huerta (September 23, 1917 – February 5, 1984), more widely known as El Santo, or in English The Saint, was a Mexican Luchador enmascarado (Spanish for masked professional wrestler), film actor, and folk hero. El Santo is one of the most famous and iconic Mexican luchadores, and has been referred to as one of "the greatest legends in Mexican sports". His wrestling career spanned nearly five decades, during which he became a folk hero and a symbol of justice for the common man through his appearances in lucha films and comic books telling fictionalized stories of El Santo fighting for justice. Read more on Wikipedia

Since 2007, the English Wikipedia page of El Santo has received more than 444,532 page views. His biography is available in 15 different languages on Wikipedia making him the 13th most popular wrestler.

Among wrestlers, El Santo ranks 13 out of 562. Before him are Antonio Inoki, John Cena, Bayram Şit, Dave Bautista, The Undertaker, and Ric Flair. After him are Rikidōzan, Aleksandr Karelin, Bruno Sammartino, Ivan Poddubny, Aleksandr Medved, and Triple H.

Among WRESTLERS In Mexico