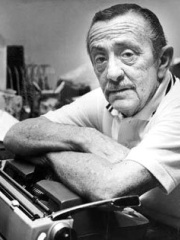 John Fante (April 8, 1909 – May 8, 1983) was an American novelist, short story writer, and screenwriter. He is best known for his semi-autobiographical novel Ask the Dust (1939) about the life of a struggling writer, Arturo Bandini, in Depression-era Los Angeles. It is widely considered the great Los Angeles novel and is one in a series of four, published between 1938 and 1985, that are now collectively called "The Bandini Quartet". Read more on Wikipedia

John Fante is most famous for his novels, Ask the Dust and Wait Until Spring, Bandini.

Among writers, John Fante ranks 729 out of 5,794. Before him are Vittoria Colonna, Cornelia, mother of the Gracchi, Amin Maalouf, Curzio Malaparte, Faxian, and Jean de La Bruyère. After him are Cesare Pavese, Epicharmus of Kos, Theodoret, Clarice Lispector, John Jacob Astor IV, and Yanka Kupala.