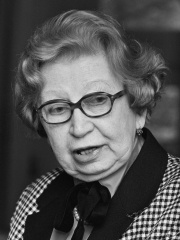 Hermine "Miep" Gies (Dutch pronunciation: [ˈmip ˈxis]; née Santrouschitz; 15 February 1909 – 11 January 2010) was one of the Dutch citizens who hid Anne Frank, her family (Otto Frank, Margot Frank, Edith Frank-Holländer) and four other Dutch Jews (Fritz Pfeffer, Hermann van Pels, Auguste van Pels, Peter van Pels) from the Nazis in an annex above Otto Frank's business premises during World War II. She was Austrian by birth, but in 1920, at the age of eleven, she was taken in as a foster child by a Dutch family to whom she became very attached. Although she was initially only to stay for six months, this stay was extended to one year because of frail health, after which Gies chose to remain with them, living the rest of her life in the Netherlands. Read more on Wikipedia

Miep Gies was a Dutch woman who helped hide Anne Frank and her family from the Nazis.