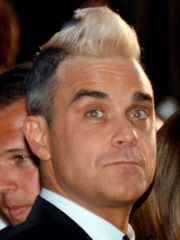 Robert Peter Williams (born 13 February 1974) is an English singer-songwriter and entertainer. He found fame as a member of the pop group Take That from 1990 to 1995, but achieved greater commercial success with his solo career, beginning in 1996. Williams has released seven UK number one singles and eleven out of his twelve studio albums have reached number one in the UK. Six of his albums are among the top 100 biggest-selling albums in the United Kingdom–four albums in the top 60–and in 2006 he entered the Guinness Book of World Records for selling 1.6 million tickets of his Close Encounters Tour in a single day.Williams has received a record eighteen Brit Awards—winning Best British Male Artist four times, two awards for Outstanding Contribution to Music and the 2017 Brits Icon for his "lasting impact on British culture", eight German ECHO Awards, and three MTV European Music Awards. Read more on Wikipedia