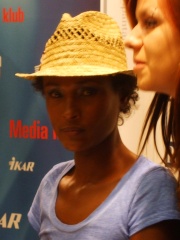 Waris Dirie (Somali: Waris Diiriye) (born in 1965) is a Somali model, author, actress and human rights activist in the fight against Female Genital Mutilation (FGM). From 1997 to 2003, she was a UN special ambassador against female genital mutilation. Read more on Wikipedia

Waris Dirie is most famous for her memoir, Desert Flower, which tells the story of her life as a nomadic child and the abuse she suffered at the hands of her father.

Among writers, Waris Dirie ranks 867 out of 5,794. Before her are Miep Gies, Marcus Valerius Messalla Corvinus, Theodore Beza, Theodor Fontane, Julius Fučík, and Pietro Bembo. After her are Cao Xueqin, Else Lasker-Schüler, Richard Matheson, Kobayashi Issa, Nestor the Chronicler, and Tukaram.

Among WRITERS In Somalia

Among writers born in Somalia, Waris Dirie ranks 1. After her are Mohammed Abdullah Hassan (1856) and Nuruddin Farah (1945).