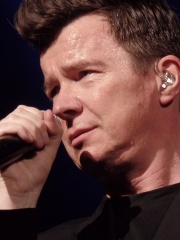 Richard Paul Astley (born 6 February 1966) is an English singer, songwriter and radio personality, who has been active in music for several decades. He gained worldwide fame in the 1980s, having multiple hits including his signature song "Never Gonna Give You Up", "Together Forever" and "Whenever You Need Somebody", and returned to music full-time in the 2000s after a 6-year hiatus. Outside his music career, Astley has occasionally worked as a radio DJ and a podcaster.Born and raised in Lancashire, Astley became a musician after leaving school, as the drummer for the soul band FBI. Three years later, he rose to fame through his association with the production trio Stock Aitken Waterman; releasing the 1987 album Whenever You Need Somebody, which sold 15.2 million copies worldwide. Read more on Wikipedia