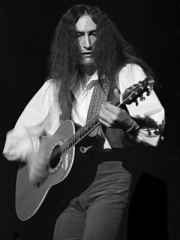 Kenneth William David Hensley (born 24 August 1945) is an English singer-songwriter, multi-instrumentalist and producer, best known for his work with Uriah Heep during the 1970s.He wrote or co-wrote the majority of Uriah Heep's songs during this period, including the hit singles "Lady in Black" (on which he sang lead vocals), "Easy Livin'" and "Stealin'", as well as "Look at Yourself", on which he also sang lead vocals, and "Free Me". Read more on Wikipedia

Since 2007, the English Wikipedia page of Ken Hensley has received more than 384,395 page views. His biography is available in 25 different languages on Wikipedia making him the 268th most popular musician.