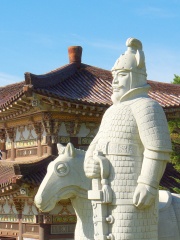 Chumo (Hangul: 추모, Hanja: 鄒牟), posthumously Chumo the Holy (Hangul: 추모성왕, Hanja: 鄒牟聖王), was the founding monarch of the kingdom of Goguryeo, and was worshipped as a god-King by people of Goguryeo. Chumo was originally a Buyeo slang for an excellent archer, which became his name later. He was commonly recorded as Jumong (Hangul: 주몽, Hanja: 朱蒙) by various Chinese literatures including history books written by Northern Qi and Tang—the name became dominant in future writings including Samguk Sagi and Samguk Yusa. Read more on Wikipedia

Dongmyeong of Goguryeo is most famous for his military campaigns, which led to the unification of the Korean peninsula.

Among politicians, Dongmyeong of Goguryeo ranks 1,438 out of 15,577. Before him are Pelagius of Asturias, Ernst Thälmann, Soong Ching-ling, Louis II of Italy, Anastas Mikoyan, and Yitzhak Shamir. After him are Getúlio Vargas, Pauline Bonaparte, Maria Amalia of Naples and Sicily, Manuel Azaña, Sebastián Piñera, and Omar al-Bashir.