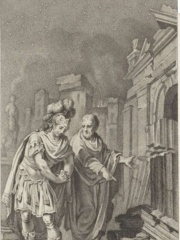 Publius Cornelius Scipio Africanus Aemilianus (185–129 BC), primarily known as Scipio Aemilianus, was a Roman general and statesman noted for his military exploits in the Third Punic War against Carthage and during the Numantine War in Spain. He oversaw the final defeat and destruction of the city of Carthage. He was a prominent patron of writers and philosophers, the most famous of whom was the Greek historian Polybius. Read more on Wikipedia

Since 2007, the English Wikipedia page of Scipio Aemilianus has received more than 318,616 page views. His biography is available in 37 different languages on Wikipedia making him the 880th most popular politician.

Among politicians, Scipio Aemilianus ranks 875 out of 14,801. Before him are Farouk of Egypt, Arthur Wellesley, 1st Duke of Wellington, Sukjong of Joseon, Władysław III of Poland, Mindaugas, and Tullus Hostilius. After him are Hans-Adam II, Prince of Liechtenstein, Adolphe Thiers, Frederick VI of Denmark, Nikolai Bukharin, Nizam al-Mulk, and Frederick William, Elector of Brandenburg.