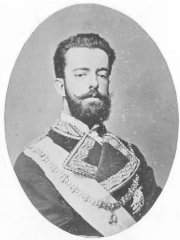 Amadeo I of Spain

Amadeo (Italian: Amedeo, sometimes latinized as Amadeus; full name: Amedeo Ferdinando Maria di Savoia; 30 May 1845 – 18 January 1890) was an Italian prince who reigned as King of Spain from 1870 to 1873. The first and only King of Spain to come from the House of Savoy, he was the second son of Victor Emmanuel II of Italy and was known for most of his life as the Duke of Aosta, the usual title for a second son in the Savoyard dynasty. He was elected by the Cortes Generales as Spain's monarch in 1870, following the deposition of Isabel II, and was sworn in the following year. Read more on Wikipedia

Amedeo I of Spain is most famous for his rule over the Kingdom of Italy. He was the son of King Vittorio Emanuele II of Italy and Maria Sofia of Austria. He was also the grandson of Emperor Franz Joseph I of Austria and Empress Elisabeth of Bavaria.

Page views of Amadeo I of Spains by language

Among politicians, Amadeo I of Spain ranks 1,004 out of 15,577. Before him are Gudea, John I Tzimiskes, Fernando Álvarez de Toledo, 3rd Duke of Alba, John VIII Palaiologos, Alfonso VI of León and Castile, and Randal Cremer. After him are Maria of Austria, Holy Roman Empress, Khalifa bin Zayed Al Nahyan, Ptolemy VI Philometor, John II of Portugal, Ælfweard of Wessex, and Empress Gi.