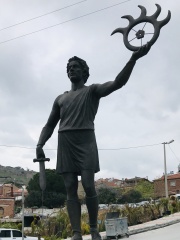 Eumenes III (; Greek: Εὐμένης Γʹ; originally named Aristonicus; in Greek Aristonikos Ἀριστόνικος) was a pretender to the throne of Pergamon. He led the revolt against the Pergamene regime and found success early on, seizing various cities near the coast of Anatolia, including the island of Samos, and killing the Roman Consul Publius Licinius Crassus Dives Mucianus. Read more on Wikipedia

Eumenes III was a ruler of Pergamon in the 3rd century BC. He was a son of Attalus II and brother of Philetaerus. Eumenes III was most famous for his military skills and for his role in the victory over the Gauls at the Battle of Magnesia.

Among politicians, Eumenes III ranks 4,099 out of 15,710. Before him are Yuan Chonghuan, Blanche of Namur, Moinuddin Chishti, Khalil Sultan, Jean Jacques Régis de Cambacérès, and François Tombalbaye. After him are Charles, Duke of Mayenne, Hypereides, Ernest I, Duke of Saxe-Gotha, Francesco Maria I della Rovere, Duke of Urbino, Erwin Piscator, and Teispes.