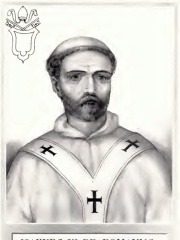 Pope John XI (Latin: Ioannes XI; died December 935) was the bishop of Rome and nominal ruler of the Papal States from March 931 to his death. The true ruler of Rome at the time was his mother, Marozia, followed by his brother Alberic II. Read more on Wikipedia

Since 2007, the English Wikipedia page of Pope John XI has received more than 165,724 page views. His biography is available in 63 different languages on Wikipedia making him the 419th most popular religious figure.

Among religious figures, Pope John XI ranks 420 out of 2,001. Before him are Simon Magus, Abu Hurairah, William Laud, Pancras of Rome, Bruno of Cologne, and Rose of Lima. After him are Muhammad al-Baqir, Abd Allah ibn Abbas, Pope Agapetus I, Pope Soter, Salome, and Maya.

Among people born in 910, Pope John XI ranks 1. After him are Pope Benedict VII, Adalbert of Magdeburg, Gunnbjörn Ulfsson, Hasdai ibn Shaprut, Eadgyth, William III, Duke of Aquitaine, Fernán González of Castile, Andregoto Galíndez, Theobald I, Count of Blois, and Helena Lekapene. Among people deceased in 936, Pope John XI ranks 2. Before him is Henry the Fowler. After him are Rudolph of France, Al-Ash'ari, and Boso, Margrave of Tuscany.