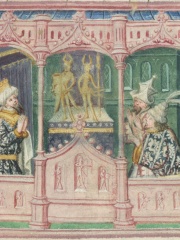 Ragnar Lodbrok, according to legends, was a Viking hero and a Danish and Swedish king. He is known from Old Norse poetry of the Viking Age, Icelandic sagas, and near-contemporary chronicles. According to the traditional literature, Ragnar distinguished himself by conducting many raids against the British Isles and the Holy Roman Empire during the 9th century. Read more on Wikipedia

Ragnar Lodbrok is most famous for his many raids and conquests. He is also famous for being the father of Ivar the Boneless, Halfdan the Black, and Ubba.

Among noblemen, Ragnar Lodbrok ranks 5 out of 842. Before him are Elizabeth II, Henry VIII of England, Marie Antoinette, and Ramesses II. After him are Catherine the Great, Prince Philip, Duke of Edinburgh, Margrethe II of Denmark, Akihito, Archduke Franz Ferdinand of Austria, Queen Elizabeth The Queen Mother, and William the Conqueror.

Among NOBLEMEN In Norway