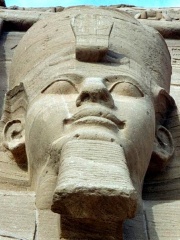 Ramesses II (Ancient Egyptian: rꜥ-ms-sw Rīʿa-məsī-sū, pronounced [ˈɾiːʕaʔ məˈsiːˌsuw], meaning "Ra is the one who bore him"; c. 1303–1213 BC), commonly known as Ramesses the Great, was the third pharaoh of the Nineteenth Dynasty of Egypt. Along with Thutmose III he is often regarded as the greatest, most celebrated, and most powerful pharaoh of the New Kingdom, itself the most powerful period of Ancient Egypt.The name Ramesses is pronounced variously . Read more on Wikipedia

Ramesses II was most famous for his military conquests. He was the third pharaoh of the Nineteenth Dynasty of Egypt.

Among noblemen, Ramesses II ranks 4 out of 842. Before him are Elizabeth II, Henry VIII of England, and Marie Antoinette. After him are Ragnar Lodbrok, Catherine the Great, Prince Philip, Duke of Edinburgh, Margrethe II of Denmark, Akihito, Archduke Franz Ferdinand of Austria, Queen Elizabeth The Queen Mother, and William the Conqueror.

Among NOBLEMEN In Israel