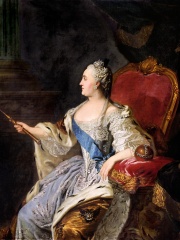 Catherine II (born Sophie of Anhalt-Zerbst; 2 May 1729 – 17 November 1796), most commonly known as Catherine the Great, was the last Empress of Russia (1762 to 1796) and the longest-ruling. She came to power following the overthrow of her husband and second cousin, Peter III. Under her long reign, inspired by the ideas of the Enlightenment, Russia experienced a renaissance of culture and sciences, which led to many new cities, universities, and theaters being founded; along with large-scale immigration from the rest of Europe, and the recognition of Russia as one of the great powers of Europe. In her accession to power and her rule of the empire, Catherine often relied on her noble favourites, most notably Count Grigory Orlov and Grigory Potemkin. Read more on Wikipedia

Catherine the Great was most famous for her contributions to the arts, including the establishment of the Russian Academy of Sciences and the Hermitage Museum. She also expanded the borders of Russia, made it a world power, and was the first woman to rule Russia.

Page views of Catherine the Greats by language

Among noblemen, Catherine the Great ranks 6 out of 842. Before her are Elizabeth II, Henry VIII of England, Marie Antoinette, Ramesses II, and Ragnar Lodbrok. After her are Prince Philip, Duke of Edinburgh, Margrethe II of Denmark, Akihito, Archduke Franz Ferdinand of Austria, Queen Elizabeth The Queen Mother, and William the Conqueror.