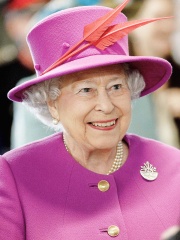 Elizabeth II (Elizabeth Alexandra Mary; 21 April 1926 – 8 September 2022) was Queen of the United Kingdom and other Commonwealth realms from 6 February 1952 until her death in 2022. She was queen regnant of 32 sovereign states during her lifetime and 15 at the time of her death. Read more on Wikipedia

Elizabeth II is most famous for being the longest reigning British monarch.

BBC News
Queen Elizabeth II leaves complex legacy for Aboriginal Australians
Some are grappling with how to celebrate her life while also acknowledging trauma from colonisation.
https://www.facebook.com/bbcnews
/FILM
Here's How The James Bond Franchise Will Incorporate The Passing Of Queen Elizabeth II
The death of Queen Elizabeth II has dominated global news this month, and it's something that has even filtered down to movie discussions, especially where the James Bond franchise is concerned. For 60 years — ever since Sean Connery first played Bond in "Dr.…
Joshua Meyer
Eonline.com
King Charles III's New Portrait Features Photograph of Parents Queen Elizabeth II and Prince Philip
A portrait of King Charles III inside Buckingham Palace shows him performing government duties in front of a photograph of his late parents, Queen Elizabeth II and Prince Philip. See the picture.
Gabrielle Chung
Deadline
Two Seasons Of ‘The Crown’ Crack Netflix’s Weekly Top 10 During Mourning For Queen Elizabeth II, ‘Attorney Woo’s Extraordinary Streak Ends
Queen Elizabeth II’s Sept. 8 death sent viewers flocking to Netflix’s The Crown, with Season 1 of the Peter Morgan drama returning to the streamer’s Top 10 at #7 for the week of Sept. 5 – Sept. 11, which included the day the news of the Queen’s passing broke …
Nellie Andreeva