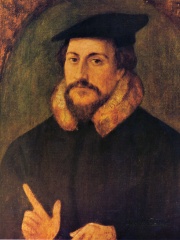 With an HPI of 87.44, John Calvin is the most famous French Religious Figure.  His biography has been translated into 103 different languages on wikipedia.

John Calvin (; Middle French: Jean Cauvin; French: Jean Calvin [ʒɑ̃ kalvɛ̃]; 10 July 1509 – 27 May 1564) was a French theologian, pastor, and reformer in Geneva during the Protestant Reformation. He was a principal figure in the development of the system of Christian theology later called Calvinism, including its doctrines of predestination and of God's absolute sovereignty in the salvation of the human soul from death and eternal damnation. Calvinist doctrines were influenced by and elaborated upon the Augustinian and other Christian traditions. Various Congregational, Reformed and Presbyterian churches, which look to Calvin as the chief expositor of their beliefs, have spread throughout the world. Calvin was a tireless polemicist and apologetic writer who generated much controversy. He also exchanged cordial and supportive letters with many reformers, including Philipp Melanchthon and Heinrich Bullinger. In addition to his seminal Institutes of the Christian Religion, Calvin wrote commentaries on most books of the Bible, confessional documents, and various other theological treatises. Calvin was originally trained as a humanist lawyer. He broke from the Roman Catholic Church around 1530. After religious tensions erupted in widespread deadly violence against Protestant Christians in France, Calvin fled to Basel, Switzerland, where in 1536 he published the first edition of the Institutes. In that same year, Calvin was recruited by Frenchman William Farel to join the Reformation in Geneva, where he regularly preached sermons throughout the week. However, the governing council of the city resisted the implementation of their ideas, and both men were expelled. At the invitation of Martin Bucer, Calvin proceeded to Strasbourg, where he became the minister of a church of French refugees. He continued to support the reform movement in Geneva, and in 1541 he was invited back to lead the church of the city. Following his return, Calvin introduced new forms of church government and liturgy, despite opposition from several powerful families in the city who tried to curb his authority. During this period, Michael Servetus, a Spaniard regarded by both Roman Catholics and Protestants as having a heretical view of the Trinity, arrived in Geneva. He was denounced by Calvin and burned at the stake for heresy by the city council. Following an influx of supportive refugees and new elections to the city council, Calvin's opponents were forced out. Calvin spent his final years promoting the Reformation both in Geneva and throughout Europe. 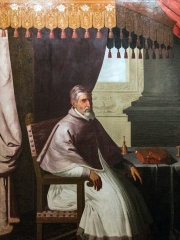 With an HPI of 83.67, Pope Urban II is the 2nd most famous French Religious Figure.  His biography has been translated into 80 different languages.

Pope Urban II (Latin: Urbanus II; c. 1035 – 29 July 1099), otherwise known as Odo of Châtillon or Otho de Lagery, was the head of the Catholic Church and ruler of the Papal States from 12 March 1088 to his death. He is best known for initiating the Crusades.Pope Urban was a native of France, and was a descendant of a noble family from the French commune of Châtillon-sur-Marne. Reims was the nearby cathedral school where he began his studies in 1050.Before his papacy, Urban was the grand prior of Cluny and bishop of Ostia. As pope, he dealt with Antipope Clement III, infighting of various Christian nations, and the Muslim incursions into Europe. In 1095 he started preaching the First Crusade (1096–99). He promised forgiveness and pardon for all of the past sins of those who would fight to reclaim the holy land from Muslims and free the eastern churches. This pardon would also apply to those that would fight the Muslims in Spain. While the First Crusade resulted in the liberation of Jerusalem from the Fatimids, Pope Urban II died before he could receive this news. He also set up the modern-day Roman Curia in the manner of a royal ecclesiastical court to help run the Church.He was beatified by Pope Leo XIII on 14 July 1881. 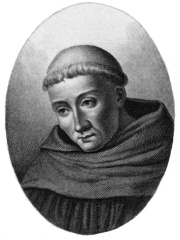 With an HPI of 82.51, Bernard of Clairvaux is the 3rd most famous French Religious Figure.  His biography has been translated into 63 different languages.

Bernard of Clairvaux (Latin: Bernardus Claraevallensis; 1090 – 20 August 1153), venerated as Saint Bernard, was a Burgundian abbot and a major leader in the revitalization of Benedictine monasticism through the nascent Cistercian Order. He was sent to found Clairvaux Abbey at an isolated clearing in a glen known as the Val d'Absinthe, about 15 kilometres (9.3 mi) southeast of Bar-sur-Aube. In the year 1128, Bernard attended the Council of Troyes, at which he traced the outlines of the Rule of the Knights Templar, which soon became an ideal of Christian nobility. On the death of Pope Honorius II in 1130, a schism arose in the church. Bernard was a major proponent of Pope Innocent II, arguing effectively for his legitimacy over the Antipope Anacletus II. In 1139, Bernard attended the Second Council of the Lateran and criticized Peter Abelard vocally. Bernard advocated crusades in general and convinced many to participate in the unsuccessful Second Crusade, notably through a famous sermon at Vézelay (1146). Bernard was canonized just 21 years after his death by Pope Alexander III. In 1830 Pope Pius VIII declared him a Doctor of the Church. 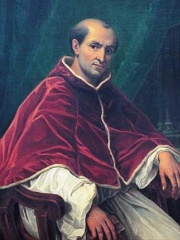 With an HPI of 81.84, Pope Clement V is the 4th most famous French Religious Figure.  His biography has been translated into 66 different languages.

Pope Clement V (Latin: Clemens Quintus; c. 1264 – 20 April 1314), born Raymond Bertrand de Got (also occasionally spelled de Guoth and de Goth), was head of the Catholic Church and ruler of the Papal States from 5 June 1305 to his death in April 1314. He is remembered for suppressing the order of the Knights Templar and allowing the execution of many of its members. Pope Clement V was the pope who moved the Papacy from Rome to Avignon, ushering in the period known as the Avignon Papacy. 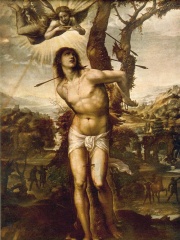 With an HPI of 81.73, Saint Sebastian is the 5th most famous French Religious Figure.  His biography has been translated into 60 different languages.

Saint Sebastian (in Latin: Sebastianus; c. AD 256 – 288) was an early Christian saint and martyr. According to traditional belief, he was killed during the Diocletianic Persecution of Christians. He was initially tied to a post or tree and shot with arrows, though this did not kill him. He was, according to tradition, rescued and healed by Saint Irene of Rome, which became a popular subject in 17th-century painting. In all versions of the story, shortly after his recovery he went to Diocletian to warn him about his sins, and as a result was clubbed to death. He is venerated in the Catholic Church and the Orthodox Church. The oldest record of the details of Sebastian's martyrdom is found in the Chronograph of 354, which mentions him as a martyr, venerated on January 20. He is also mentioned in a sermon on Psalm 118 by 4th-century bishop Ambrose of Milan (Saint Ambrose): in his sermon, Ambrose stated that Sebastian came from Milan and that he was already venerated there at that time. The full account of his martyrdom comes from the Passio Sancti Sebastiani, a 5th century text written by an anounymous author, possibily Arnobius the Younger. Saint Sebastian is a popular male saint, especially today among athletes. In medieval times, he was regarded as a saint with a special ability to intercede to protect from plague, and devotion to him greatly increased when plague was active. 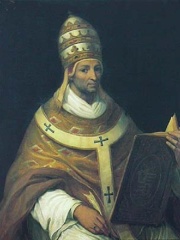 With an HPI of 81.05, Pope John XXII is the 6th most famous French Religious Figure.  His biography has been translated into 64 different languages.

Pope John XXII (Latin: Ioannes PP. XXII; 1244 – 4 December 1334), born Jacques Duèze (or d'Euse), was head of the Catholic Church from 7 August 1316 to his death in 1334. He was the second and longest-reigning Avignon Pope, elected by the Conclave of Cardinals, which was assembled in Lyon through the work of King Louis X's brother Philip, the Count of Poitiers, later King Philip V of France. Like his predecessor, Clement V, Pope John centralized power and income in the Papacy and lived a princely life in Avignon. He opposed the political policies of Louis IV of Bavaria as Holy Roman Emperor, which prompted Louis to invade Italy and set up an antipope, Nicholas V. Pope John XXII faced controversy in theology involving his views on the beatific vision, and he opposed the Franciscan understanding of the poverty of Christ and his apostles, famously leading William of Ockham to write against unlimited papal power. In 1323, he canonized Thomas Aquinas. 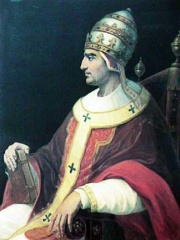 With an HPI of 80.69, Pope Gregory XI is the 7th most famous French Religious Figure.  His biography has been translated into 68 different languages.

Pope Gregory XI (Latin: Gregorius, born Pierre Roger de Beaufort; c. 1329 – 27 March 1378) was head of the Catholic Church from 30 December 1370 to his death in 1378. He was the seventh and last Avignon pope and the most recent French pope recognized by the modern Catholic Church. In 1377, Gregory XI returned the Papal court to Rome, ending nearly 70 years of papal residency in Avignon, France. His death shortly after was followed by the Western Schism involving two Avignon-based antipopes. 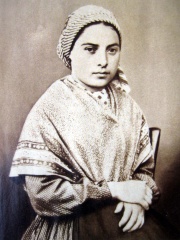 With an HPI of 80.55, Bernadette Soubirous is the 8th most famous French Religious Figure.  Her biography has been translated into 54 different languages.

Bernadette Soubirous (; French: [bɛʁnadɛt subiʁu]; Occitan: Bernadeta Sobirós [beɾnaˈðetɔ suβiˈɾus]; 7 January 1844 – 16 April 1879), also known as Saint Bernadette of Lourdes, was the firstborn daughter of a miller from Lourdes (Lorda in Occitan), in the department of Hautes-Pyrénées in France, and is best known for experiencing Marian apparitions of a "young lady" who asked for a chapel to be built at the nearby cave-grotto at Massabielle. These apparitions occurred between 11 February and 16 July 1858, and the woman who appeared to her identified herself as the "Immaculate Conception." After a canonical investigation, Soubirous's reports were eventually declared "worthy of belief" on 18 February 1862, and the Marian apparition became known as Our Lady of Lourdes. Catholics believe that Soubirous’s body has remained internally incorrupt. The Marian shrine at Lourdes (Midi-Pyrénées, from 2016 part of Occitanie) went on to become a major pilgrimage site, attracting over five million pilgrims of all denominations each year. On 8 December 1933, Pope Pius XI, declared Soubirous a saint of the Catholic Church. Her feast day, initially specified as 18 February – the day Mary promised to make her happy, not in this life, but in the other – is now observed in most places on the date of her death, 16 April. 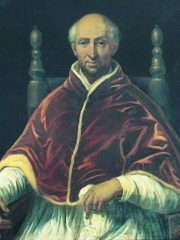 With an HPI of 80.49, Pope Clement VI is the 9th most famous French Religious Figure.  His biography has been translated into 65 different languages.

Pope Clement VI (Latin: Clemens VI; 1291 – 6 December 1352), born Pierre Roger, was head of the Catholic Church from 7 May 1342 to his death in 1352. He was the fourth Avignon pope. Clement reigned during the first visitation of the Black Death (1348–1350), during which he granted remission of sins to all who died of the plague. Roger steadfastly resisted temporal encroachments on the Church's ecclesiastical jurisdiction and, as Clement VI, entrenched French dominance of the Church and opened its coffers to enhance the regal splendour of the Papacy. He recruited composers and music theorists for his court, including figures associated with the then-innovative Ars Nova style of France and the Low Countries. 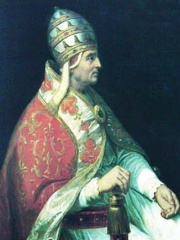 With an HPI of 80.27, Pope Urban V is the 10th most famous French Religious Figure.  His biography has been translated into 70 different languages.

Pope Urban V (Latin: Urbanus V; 1310 – 19 December 1370), born Guillaume de Grimoard, was the head of the Catholic Church from 28 September 1362 until his death in 1370 and was also a member of the Order of Saint Benedict. He was the only Avignon pope to be beatified. Even after his election as pontiff, he continued to follow the Benedictine Rule, living simply and modestly. His habits did not always gain him supporters who were used to lives of affluence. Urban V pressed for reform throughout his pontificate and also oversaw the restoration and construction of churches and monasteries. One of the goals he set himself upon his election to the Papacy was the reunion of the Eastern and Western Churches. He came as close as some of his predecessors and successors, but did not succeed.