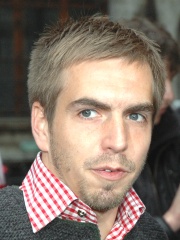 Philipp Lahm (German pronunciation: [ˈfɪlɪp ˈlaːm]; born 11 November 1983) is a German former professional footballer who played as a full-back. Considered by many to be one of the best defenders of his generation and one of the greatest defenders of all time, Lahm was the captain of Bayern Munich, having led them to numerous honours including the 2013 UEFA Champions League as part of the Treble. He is also a former captain of his national team, which he led to win the 2014 FIFA World Cup, before retiring from international football.Lahm was included in the World Cup team of the tournament in 2006, 2010, and 2014, and the UEFA Team of the Tournament in 2008 and 2012 and in the UEFA Team of the Year 2006, 2008, 2012, 2013 and 2014. Read more on Wikipedia