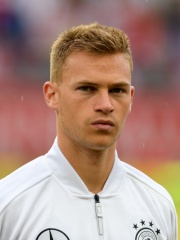 Joshua Walter Kimmich (German pronunciation: [ˈjoːzu̯aː ˈkɪmɪç]; born 8 February 1995) is a German professional footballer who plays as a defensive midfielder or right-back for Bundesliga club Bayern Munich and the Germany national team. He is known for his complete playstyle, versatility, aggression, and playmaking ability and is considered one of the best and most complete midfielders in the world, He is often compared with former Bayern Munich captain Philipp Lahm and is considered his successor.After coming through RB Leipzig's youth academy, Kimmich began playing for the club' first team in 2013. Two years later, he joined Bayern Munich. Read more on Wikipedia