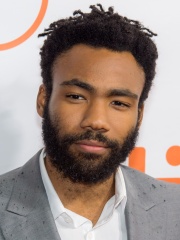 Donald McKinley Glover Jr. (born September 25, 1983) is an American actor, musician, comedian, director, producer, screenwriter and DJ. He performs music under the stage name Childish Gambino and as a DJ under the name mcDJ. After working on Derrick Comedy while studying at New York University, Glover was hired at age 23 by Tina Fey as a writer for the NBC sitcom 30 Rock. He later rose to fame for portraying college student Troy Barnes on the NBC sitcom Community. Read more on Wikipedia

Since 2007, the English Wikipedia page of Donald Glover has received more than 30,401,383 page views. His biography is available in 43 different languages on Wikipedia making him the 835th most popular actor.