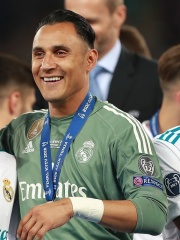 Keilor Antonio Navas Gamboa (Spanish pronunciation: [kejˈloɾ anˈtonjo ˈnaβaz ɣamˈbo.a]; born 15 December 1986), known as Keylor Navas, is a Costa Rican professional footballer who plays as a goalkeeper for Ligue 1 club Paris Saint-Germain and the Costa Rica national team. Considered as one of the best goalkeepers in the world he started his youth career at Saprissa in his home country, where he won six Liga FPD titles and the CONCACAF Champions League, he subsequently moved to Spanish club Albacete in 2010, and then to Levante in La Liga the following year, where he won the LFP Award for Best Goalkeeper in his final season with the latter club. Navas later joined Real Madrid in 2014 for €10 million. Read more on Wikipedia

Among SOCCER PLAYERS In Costa Rica