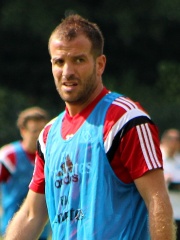 Rafael Ferdinand van der Vaart (Dutch pronunciation: [ˈraːfaːɛl vɑn dɛr ˈvaːrt] (listen); born 11 February 1983) is a Dutch professional darts player and former professional footballer who played as an attacking midfielder.Van der Vaart began his career at Ajax's youth academy and worked his way into the first team, debuting as a 17-year-old. Known for his playmaking skills, he drew comparisons to Johan Cruyff. He was named Dutch Football Talent of the Year and became the first recipient of the Golden Boy Award while at the club. Read more on Wikipedia

Since 2007, the English Wikipedia page of Rafael van der Vaart has received more than 1,951,004 page views. His biography is available in 59 different languages on Wikipedia making him the 715th most popular soccer player.