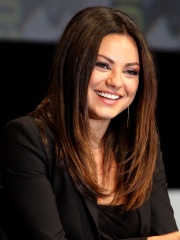 Milena Markovna Kunis (; Ukrainian: Мілена Марківна Куніс; Russian: Милена Марковна Кунис; born August 14, 1983) is an American actress. In 1991, at the age of 7, she moved from Soviet Ukraine to the United States with her family. After being enrolled in acting classes as an after-school activity, she was soon discovered by an agent. Read more on Wikipedia

Since 2007, the English Wikipedia page of Mila Kunis has received more than 31,324,680 page views. Her biography is available in 94 different languages on Wikipedia making her the 1,624th most popular actor.

Among actors, Mila Kunis ranks 1,604 out of 8,832. Before her are Melissa McBride, Geraldine McEwan, Jeff Daniels, Massimo Troisi, Annabella, and Will Ferrell. After her are Amanda Seyfried, Frank Finlay, Melissa Leo, Alison Steadman, Frederic Forrest, and Ed Asner.