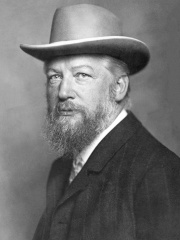 Friedrich Wilhelm Ostwald (German pronunciation: [ˈvɪlhɛlm ˈɔstˌvalt] (listen); 2 September [O.S. 21 August] 1853 – 4 April 1932) was a Baltic German chemist and philosopher. Ostwald is credited with being one of the founders of the field of physical chemistry, with Jacobus Henricus van 't Hoff, Walther Nernst, and Svante Arrhenius. He received the Nobel Prize in Chemistry in 1909 for his scientific contributions to the fields of catalysis, chemical equilibria and reaction velocities.Following his 1906 retirement from academic life, Ostwald became much involved in philosophy, art, and politics. Read more on Wikipedia

Wilhelm Ostwald was a German chemist who won the Nobel Prize in Chemistry in 1909 for his work on catalysis. Ostwald developed the theory of catalysis, which is the process by which a chemical reaction takes place.

Among CHEMISTS In Latvia