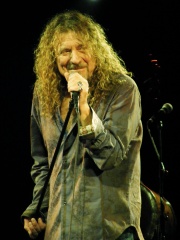 Robert Anthony Plant (born 20 August 1948) is an English singer and songwriter, best known as the lead singer and lyricist of the English rock band Led Zeppelin for all of its existence from 1968 up until 1980, when the band broke up following the death of John Bonham, the band's drummer. Plant enjoyed great success with Led Zeppelin from the late 1960s to the end of the 1970s. He developed a compelling image as the charismatic rock-and-roll front man, similar to those of contemporaries such as Mick Jagger of the Rolling Stones, Roger Daltrey of the Who, Jim Morrison of the Doors, and Freddie Mercury of Queen. Read more on Wikipedia

Robert Plant is most famous for being the lead singer and lyricist of the rock band Led Zeppelin.