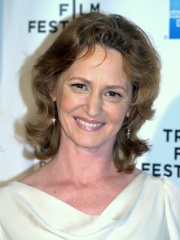 Melissa Leo (born September 14, 1960) is an American actress. She is the recipient of several accolades, including an Academy Award, a Primetime Emmy Award, a Golden Globe Award, two Critics' Choice Awards and a Screen Actors Guild Award. After appearing on several television shows and films in the 1980s, Leo became a regular on the television shows All My Children, which won her a Daytime Emmy Award, and The Young Riders. Read more on Wikipedia

Since 2007, the English Wikipedia page of Melissa Leo has received more than 3,319,461 page views. Her biography is available in 49 different languages on Wikipedia making her the 1,627th most popular actor.

Among actors, Melissa Leo ranks 1,614 out of 8,832. Before her are Massimo Troisi, Annabella, Will Ferrell, Mila Kunis, Amanda Seyfried, and Frank Finlay. After her are Alison Steadman, Frederic Forrest, Ed Asner, Henry Cavill, Jean Carmet, and Eric Campbell.