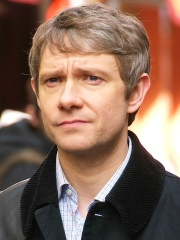 Martin John Christopher Freeman (born 8 September 1971) is an English actor. Among other accolades, he has won an Emmy Award, a BAFTA Award and a Screen Actors Guild Award, and has been nominated for a Golden Globe Award. Freeman's most notable roles are that of Tim Canterbury in the mockumentary series The Office (2001–2003), Dr. Read more on Wikipedia

The Guardian
The Responder review – Martin Freeman is magnificent in tour de police force
With rage in his heart and spit on his face, Freeman will surely win all the awards for this drama written by an ex-cop that’s as riveting as a thriller and as profound as a documentaryMartin Freeman in a nightmare is an absolute dream for viewers.In the new …
Lucy Mangan
The Guardian
TV tonight: Martin Freeman is at the end of his tether in The Responder
The actor adopts a scouse accent for his gritty portrayal of an officer in crisis. Plus, it’s tough times in Keeping Up With the Aristocrats. Here’s what to watch this evening Continue reading...
Hollie Richardson, Phil Harrison, Alexi Duggins and Henry Wong
Independent
The Responder review: Martin Freeman is on the edge of a breakdown in this grim cop drama
Freeman’s scouse cop must deal with the berserk and barmy dregs of society – but why is it all so dimly lit?
Sean O'Grady
Daily Mail
Martin Freeman admits he spoke to himself in a Liverpudlian accent in preparation for The Responder
The 50-year-old has confessed he spoke to himself in a Liverpudlian accent for a year and a half in preparation for BBC's upcoming comedy-drama, The Responder.
Callum Wells