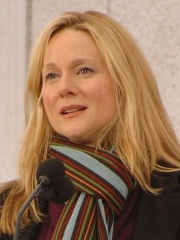 Laura Leggett Linney (born February 5, 1964) is an American actress and singer. She is the recipient of several awards, including two Golden Globe Awards and four Primetime Emmy Awards, and has been nominated for three Academy Awards and five Tony Awards. Linney made her Broadway debut in 1990 before going on to receive Tony Award nominations for the 2002 revival of The Crucible, the original Broadway productions of Sight Unseen (2004) and Time Stands Still (2010), and the 2017 revival of The Little Foxes. Read more on Wikipedia

Among actors, Laura Linney ranks 1,701 out of 10,030. Before her are Micheline Presle, Kathryn Joosten, Lisa Niemi, Clark Gregg, El Risitas, and Tom Ellis. After her are Karl Urban, Nell Gwyn, Mickey Hargitay, Rachel Félix, Miranda Richardson, and Per Oscarsson.