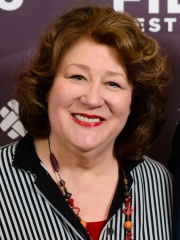 Margo Martindale (born July 18, 1951) is an American character actress who has appeared on television, film, and onstage. In 2011, she won a Primetime Emmy Award and a Critics' Choice Television Award for her recurring role as Mags Bennett on Justified. Martindale was nominated for an Emmy Award four times for her recurring role as Claudia on The Americans, winning the award in 2015 and 2016. Read more on Wikipedia

Since 2007, the English Wikipedia page of Margo Martindale has received more than 3,032,883 page views. Her biography is available in 23 different languages on Wikipedia making her the 3,545th most popular actor.

Among actors, Margo Martindale ranks 3,500 out of 8,832. Before her are BD Wong, Davy Jones, Lucy Hale, Jiang Wen, John Spencer, and Gregory Hines. After her are Rinko Kikuchi, Henry B. Walthall, Madeline Kahn, Kurt Fuller, Brett Cullen, and Jessica Walter.